​The NC Department of Transportation is proposing to widen approximately 1.9 miles of Gillis Hill Road in Hoke and Cumberland counties). This is shown as project No. U-5798B in the Statewide Transprotation Imrpovement Program.

The existing two-lane road would be widened to a four-lane road with a raised median. The project begins 1,500 feet south of Celtic Drive and ends at U.S. 401 (Raeford Road). The project is being designed in conjunction with project U-5857  to create a single, four-lane corridor from the Rockfish community to U.S. 401 (Raeford Road). The combined projects will include traffic signals at key intersections and a new bridge over Aberdeen & Rockfish Railroad line.

As currently planned, U-5798 will be divided into two sections:

o   Gillis Hill Road is being widened to four  lanes with a 17.5-foot raised median and 5-foot sidewalks; 4-foot marked bicycle lanes, and concrete curb and gutter on both sides of the road.

o   The bridge over Little Rockfish Creek is being replaced with a four-lane structure to match the roadway design.

o   Gillis Hill Road is being widened to four  lanes with a 17.5-foot raised median and 5-foot sidewalks; 4-foot marked bicycle lanes, and concrete curb and gutter on both sides of the road.

The primary need for the proposed action is to address the anticipated increase in traffic volumes in the 2040 Build Year conditions. Traffic volumes are anticipated to increase from between 7,700 to 17,000 vehicles per day  in 2017 to between 9,700 and 20,500 vehicles per day in 2040. The project will serve local residents and commuters by helping maintain acceptable levels of service (LOS) in the vicinity of the Rockfish community.  The replacement of the structurally deficient bridge over Little Rockfish Creek in U-5798 A will help improve the overall safety of Gillis Hill Road.

Why do we need to widen Gillis Hill Road?

The primary need for the proposed project is to address the anticipated increase in traffic volumes, as noted above. The project would also ease congestion during peak hours, improve safety and accommodate pedestrians and bicyclists. The number of commuters traveling from surrounding communities through Rockfish to Fort Bragg and Fayetteville is also expected to increase. The proposed project would address the projected future traffic conditions and maintain acceptable levels of service (LOS) in the vicinity of the Rockfish community. Construction of U-5798A will also replace the structurally deficient bridge over Little Rockfish Creek.

A traffic forecast was completed (Year 2040 traffic volumes) and an operations analysis was conducted to compare the two alternatives in regard to maintaining acceptable levels of service along Gillis Hill Road. The analysis determined that the four-lane roadway with median would be the most effective option for managing the 2040 projected traffic volumes and was evaluated as the recommended alternative for improvements to Gillis Hill Road.

After reviewing environmental and community impacts, NCDOT developed the design of the recommended alternative. This design was based on the proposed typical section included in the Fayetteville Area Metropolitan Planning Organization’s 2040 Metropolitan Transportation Plan dated April 16, 2014 and the traffic projections prepared by NCDOT.

A public meeting was held on April 23, 2019 where the public was given an opportunity to comment on the recommended alternative. Project maps were available for the community to review and provide input on the proposed design. The public comment response summary is available for review at the link below.

The recommended alternative will include the following in both Sections A and B: 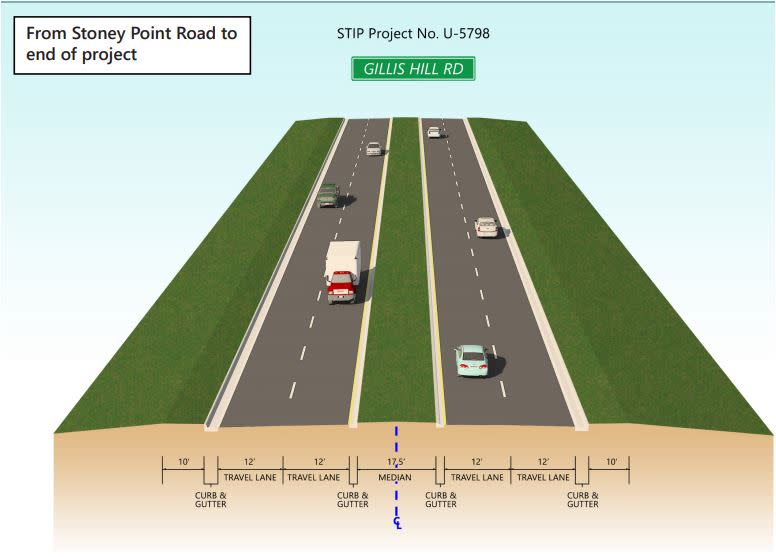 The objective of the community outreach program is to solicit input through an open, dynamic process that includes as many residents, business owners, property owners, local agencies, community groups and other stakeholders within the project study area as possible. This process is structured to involve people early and often and to share information as it becomes available.

A variety of techniques have been and will continue to be used to ensure meaningful involvement from the community.

Responses to questions and comments received during 2019 public comment period

Public participation and feedback are integral to the project development process. By sharing your ideas and concerns, you can help us identify appropriate transportation solutions in your community.

Comments and Questions should be submitted online using this webpage or by emailing  [email protected].

A public meeting was held on April 23, 2019 to obtain public input regarding the project's design.

This project is listed as Project U-5798 in the N.C. Department of Transportation's State Transportation Improvement Program and is funded below as shown by section:

Comments may be submitted below, via phone, email (Gillis-Hill-Rd@publicinput.com), or U.S. Mail to the Project Manager listed above, or at any meeting.

All comments received carry equal weight, regardless of submission method.

All comments will be reviewed and suggestions/recommendations

incorporated into designs where feasible.

NCDOT Survey
The questions marked with a red border are required.