The purpose of the proposed project is to reduce traffic congestion and improve overall traffic flow and carrying capacity within the project limits. By 2040, Benjamin Parkway/Bryan Boulevard is projected to be near or over capacity and improvements are needed to relieve congestion.

The video below provides an overview of the project materials and information shown on this page.

To avoid, minimize, and balance impacts, two project alternatives have been developed. Both alternatives are the same when comparing vehicular travel lanes and improving intersections.

The difference between the two alternatives is how they will treat the existing multi-use lane on Benjamin Parkway southbound between Northhampton Drive and Pembroke Road.

Alternative 2 would convert the existing multi-use lane to a 5-foot sidewalk providing sidewalks on both sides.

Widening of the roadway will occur on the east side to minimize impacts to the historic district and residential properties on the west side of Benjamin Parkway/Bryan Boulevard.  Several community features are located along the project corridor including a park (Guilford Hills Park), a historic district (Starmount Mid-Century Historic District), and residential properties. Efforts will be made to avoid/minimize and balance impacts to the extent practicable.

A traffic capacity study was to analyze existing and future conditions of the roadway. The level of service (LOS) was measured at each of the intersections. LOS is used to categorize traffic flow based on various performance measures, such as speed, density, and congestion, and is measured using letters A through F with A being the best and F being the worst (see the diagram below). By the year 2040, it is anticipated that all eight signalized intersections within the study area will begin operating at LOS E or F during one of the peak hours. The project is anticipated to improve LOS for seven of the eight signalized intersections to LOS D or better during both of the peak hours. The project is expected to substantially improve overall intersection operation and eliminate/reduce the major bottlenecks.

To improve safety along the project corridor, Reduced Conflict Intersections (RCI) will be used at the Benjamin Parkway/Bryan Boulevard intersections with Pembroke Road and Cornwallis Drive.

Crash data reports were collected by NCDOT between 2012 and 2017. During the five-year period, there were a total of 224 crashes within the study area with 95 reported as injury crashes and one reported as a fatality. Of the crashes, 59 percent were rear-end crashes, with angle crashes following at 22 percent. The intersection with the highest number of crashes was Benjamin Parkway/Bryan Boulevard at Cornwallis Drive.

The proposed project is part of the Greensboro Urban Area MPO Metropolitan Transportation Plan (2040) and the City of Greensboro Bicycle, Pedestrian, Trails, and Greenways (BiPed) Plan which includes the addition of sidewalk along the project corridor.

To improve safety and traffic flow along the Benjamin Parkway/Bryan Boulevard project corridor, a partial reduced conflict design is being used. The existing, signalized full movement intersections for Pembroke Road and Cornwallis Drive would be replaced with left-turn movements for north and southbound traffic directed by a raised median island. A U-turn movement would be provided for traffic from Cornwallis Drive at the ramp located near Gracewood Drive. Fairway Drive would be right-in/right-out only. Reduced conflict intersections with traffic signals reduced crashes 15 percent compared to conventional intersections, improve safety for motorists and pedestrians, and can accommodate more traffic without increased delays.

A Reduced Conflict Intersection – sometimes referred to as a superstreet, a synchronized street, or a median U-turn ​is a general term used to describe several types of designs that can be used to improve safety and traffic flow on a highway by cutting more than half of the potential locations, o​​r conflict points, where drivers and pedestrians can collide.

The most common type of Reduced Conflict Intersection design eliminates left turns from side roads onto busy main roads.

Raised medians direct traffic from the side road into turning right. When there is a safe opening in traffic, drivers enter the flow of traffic on the main route.  To go the other direction, or cross the highway, drivers pull into a dedicated lane – typically les​s than 1,000 feet away – ​and make a U-turn. There might be a traffic signal at this location.

With a Reduced Conflict Intersection, drivers from the side street only have to be concerned with one direction of traffic on the highway at a time and do not need to wait for a gap in both directions to cross a major road.

Pedestrian and Bicycle  Movements through RCIs 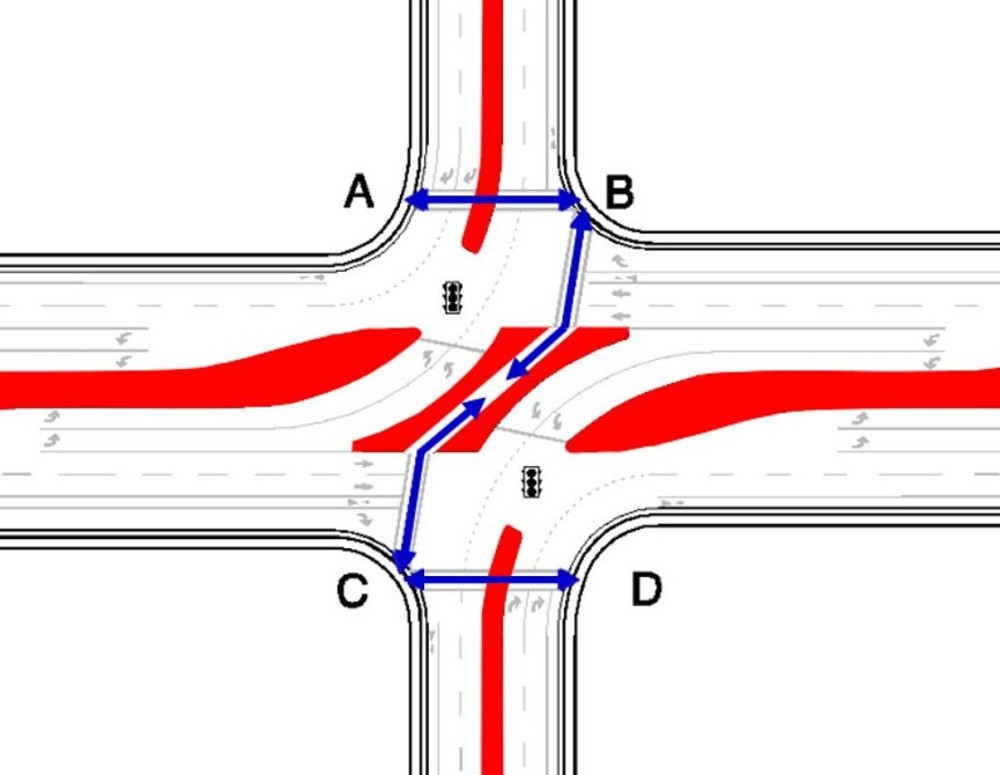 A video explaining how to read a public hearing or meeting map can be viewed below. The video contains information on colors and symbols used.

NCDOT conducted a preliminary investigation and identified seven resources within the Area of Potential Effects (APE) that warranted additional assessment. The properties consisted of Friendly Shopping Center, Kiser Middle School, Lake Daniel Park, and four post-1945 communities (Garden Homes, Green Valley, Guilford Hills, and Forest Valley). Research revealed that the section of Lake Daniel Park found within the APE was not designated a public park until the 1980s and therefore has been excluded from the evaluation because it is not 50 years of age and does not meet Criterion Exception G.

A copy of that report is available by clicking here.

* Costs are preliminary subject to change.

NCDOT accepts comments throughout all phases of project development.
The public is encouraged to leave comments using the project email or phone number.

To be included in this phase of project development, comments should be submitted by November 18, 2022.

Title VI FeedbackTo ensure we’re hearing from a broad set of voices, would you be willing to share (completely anonymously) some information about yourself? If so, please click here (https://publicinput.com/NCDOT-Title-VI)