The N.C. Department of Transportation is proposing to close the existing at-grade railroad crossings of Glover Road, Wrenn Road, and Ellis Road along the North Carolina Railroad Company NCRR corridor in Durham.  The project proposes to construct bridges which will separate vehicular traffic from passenger and freight trains.

Over the last 30 years, ten train/vehicular crashes have occurred at these three at-grade crossings including one which resulted in two fatalities.  Once the project is complete, it will improve vehicular safety by significantly reducing the risk for train/vehicular collisions at the crossings.  The project is consistent with NCDOT's ongoing effort to improve railroad crossing safety through the closure and consolidation of crossings, improving crossing protection with channelization and four-quadrant gates, constructing grade separations, and education efforts.

The NCRR corridor is a 317-mile long railroad corridor connecting Charlotte, Greensboro, Durham, and Raleigh to the State Port at Morehead City.

Without the proposed project, the additional passenger trains and expected growth in freight train volumes will result in an increased risk of collisions between vehicles and trains. 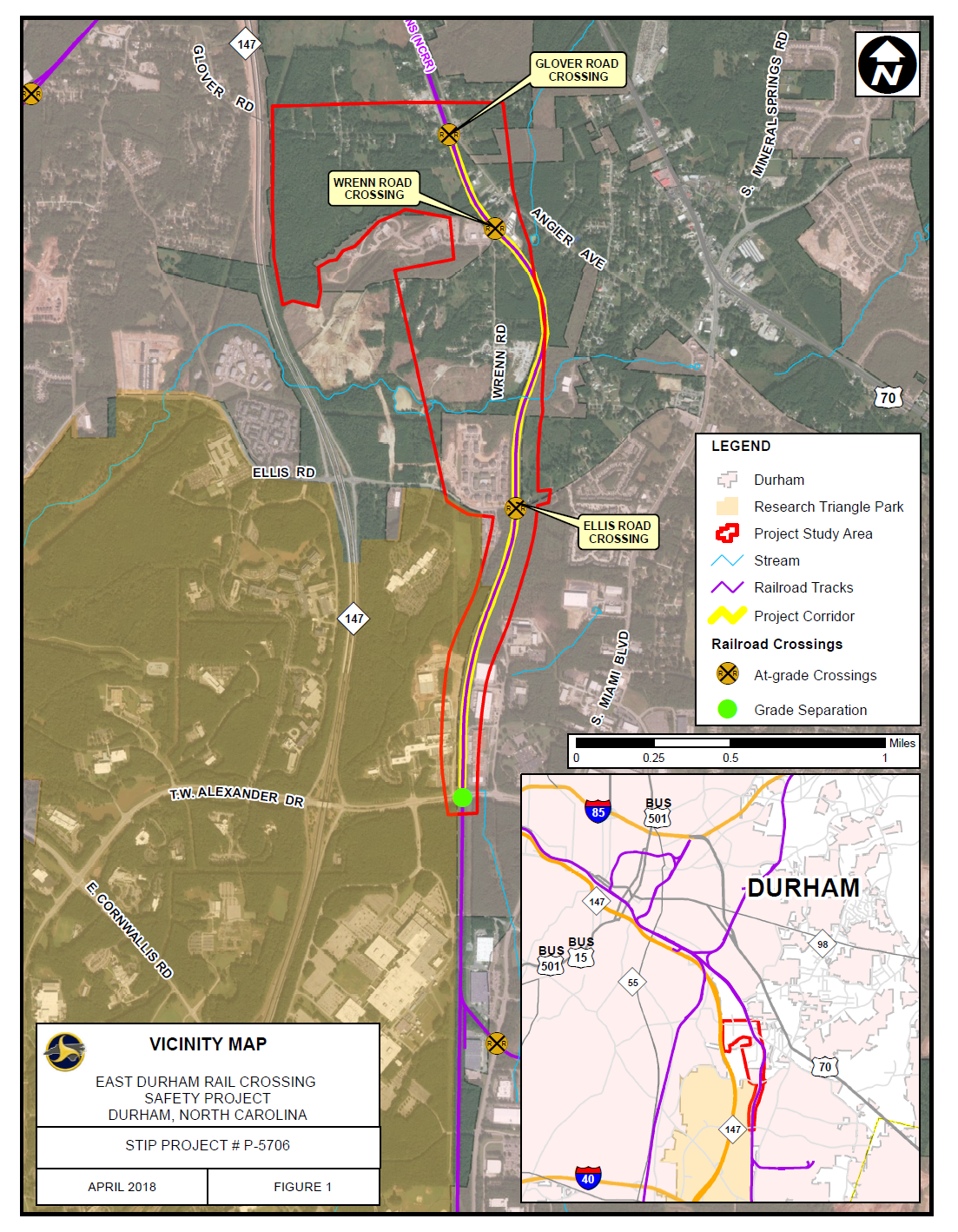 * This map for general information only.

The study area is a geographical area in which information on Human and Natural Environmental features are gathered during the preliminary planning process.

NCDOT is evaulating various alternatives to improve safety along the NCRR corridor from just north of Glover Road to T.W. Alexander Drive in Durham County.  The project is included in the 2018-2027 State Transportation Improvement Program (STIP) as Project Number P-5706.

The project consists of the following components.

The Durham Traffic Separation Study (TSS) was initiated in 2011 to evaluate traffic patterns and collect railroad crossing information along the NCRR Corridor from Neal Road in west Durham to Cornwallis Road in Research Triangle Park.  The goal of the study was to identify interim and long-term improvements to enhance safety at the crossings. A series of public meetings was conducted between November 2011 and November 2013 to solicit input from the public and gather feedback on the recommended improvements.  The study was concluded in March 2014.

A copy of the study is available here.